‘Churches Might Be One of Biggest Propagators of Racist Ideology,’ Says Hillsong Pastor Carl Lentz

Pastor Carl Lentz of Hillsong East Coast was interviewed by former NFL linebacker Emmanuel Acho on his latest episode of “Uncomfortable Conversations with a Black Man” to discuss how churches can properly deal with racial injustice.

Acho started the show by noting that “historically speaking, the most powerful person in America is a religious [more specifically Christian] white man.

According to The Christian Post, Acho then asked Lentz why American churches today remain, in large part, segregated despite the outlawing of segregation in the mid-1960s.

“It’s hard to listen to a preacher preach if you know that that preacher believes in systems that are hurting your people, Lentz responded. So it’s safer sometimes to go to a Black church … [because] I don’t know if I can trust somebody who claims to love Jesus and professes to teach me about this man yet you’re silent on issues that hurt my people.

Using an analogy of a dirty house, Lentz offered that White pastors likely fail to discuss matters of race because its too much work. As such, the matter of racial injustice has been concealed and compounded for decades in the American church.

“I think, in fact, it could be said that churches might be one of the biggest propagators of racist ideology in our country, Lentz asserted.

Following the death of George Floyd, Lentz shared that he came to the conclusion that he himself was more part of the problem than the solution.

So, the popular Hillsong pastor took his stance from the Old Testament where God says, I want justice, oceans of it. (Amos 5:24).

When in fact, it is about skin and it is about race because race and skin is what is being punished and executed on camera in America right now,” Acho contended.

Lentz and Acho also discussed if Jesus would be marching in the protests today or posting black squares on social media.

“There’s no question where Jesus would be. Where did you find Him when we have record of Him? Who was He with? Who was He angering is more important? Jesus was loathed by the religious community for what? Proximity, Lentz said.

He was at the dinner table, He was at the wrong parties, He was hanging out with the wrong people. He was talking to women when they weren’t even allowed or even acknowledged as real humans.

So if you had to wonder where Jesus would be, you got to go back to your Bible because He’s where hurting people are.

In June, Acho started the series in order to have uncomfortable conversations about race that are often unaddressed. Past guests have included actor Matthew McConaughey and reality TV couple, Chip and Joanna Gaines. 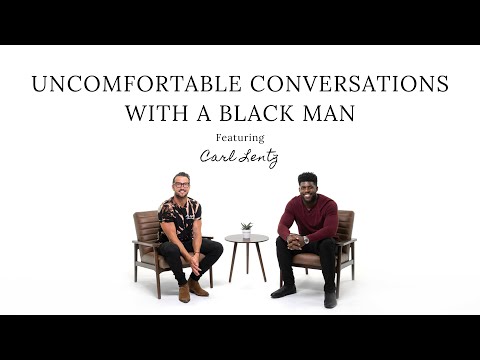 Chip, Joanna Gaines Family Sits Down for an Uncomfortable Conversation about Racism with Emmanuel Acho